I recently posted an article to a hockey coach Facebook group in which the author explores the age-old and highly divisive topic of ice time, arguing both for and sort of against (but mostly for) the idea that ‘shortening the bench’ (ie sitting some players in favor of others in an effort to win games) is a net positive for young hockey players.

As you might have guessed, the post generated a lot of comments, with opinion falling on both sides of the issue. Actually it fell all over the issue. Obviously player age and level (ie 9 year old house vs 16 year old AAA) factor in. Ditto cost (it seems parents who are paying massive fees for hockey don’t like to see their kids treated differently for unknown reasons). Ditto ‘kids these days’, ‘helicopter parents’, and ‘trust the process.’

Regardless of how you feel about it, the idea of favoring certain players over others in highly competitive situations is baked into team sports.

What’s somehow never gotten baked in are maybe the simplest things in the world when it comes to potentially contentious issues in virtually all aspects of life.

Communication: If you’re a youth coach and you plan to ‘shorten the bench’ at any time during a season, tell your parents that fact before they even sign their kid up for a tryout. And tell them the criteria by which their kids will be judged.

Rationale: If you do shorten your bench, make sure you’ve got — and have shared with everyone concerned — empirical data on which you’ve based your decisions.

If youth coaches do neither of these things, but proceed to bench certain players in favor of others, it’s just not logical to expect players and parents to ‘trust the process’ because they most likely have zero idea what ‘the process’ is.

PowerPlayer was designed to help coaches coach, and in most years of youth hockey, coaching has to include both players and parents. Because when it comes to helping people understand and trust youth hockey coaching decisions, collecting and sharing detailed player-specific performance, proficiency, and other pertinent information is a no-brainer.

Here are PowerPlayer reports for two forwards playing on the same Bantam AAA team. Both are solid players, showing strong Game Play ratings (their coaches think they both ‘get the game’ at this level), strong Intangibles ratings (their coaches think they’re both great kids), and some variability in Practice ratings (they both show inconsistency in their approach to practice), and both are above the team average (the blue dotted line) when ranked by Overall scores. 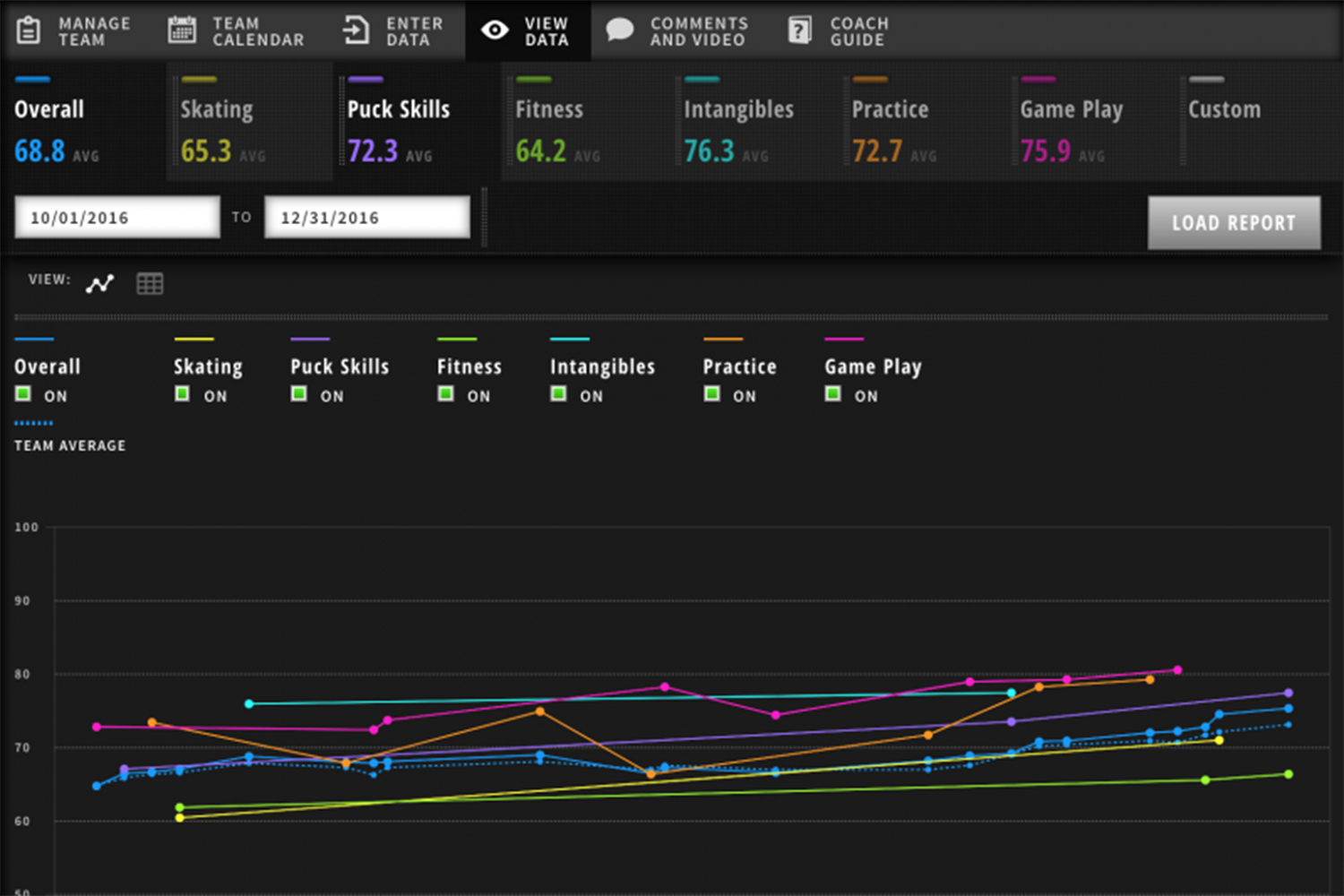 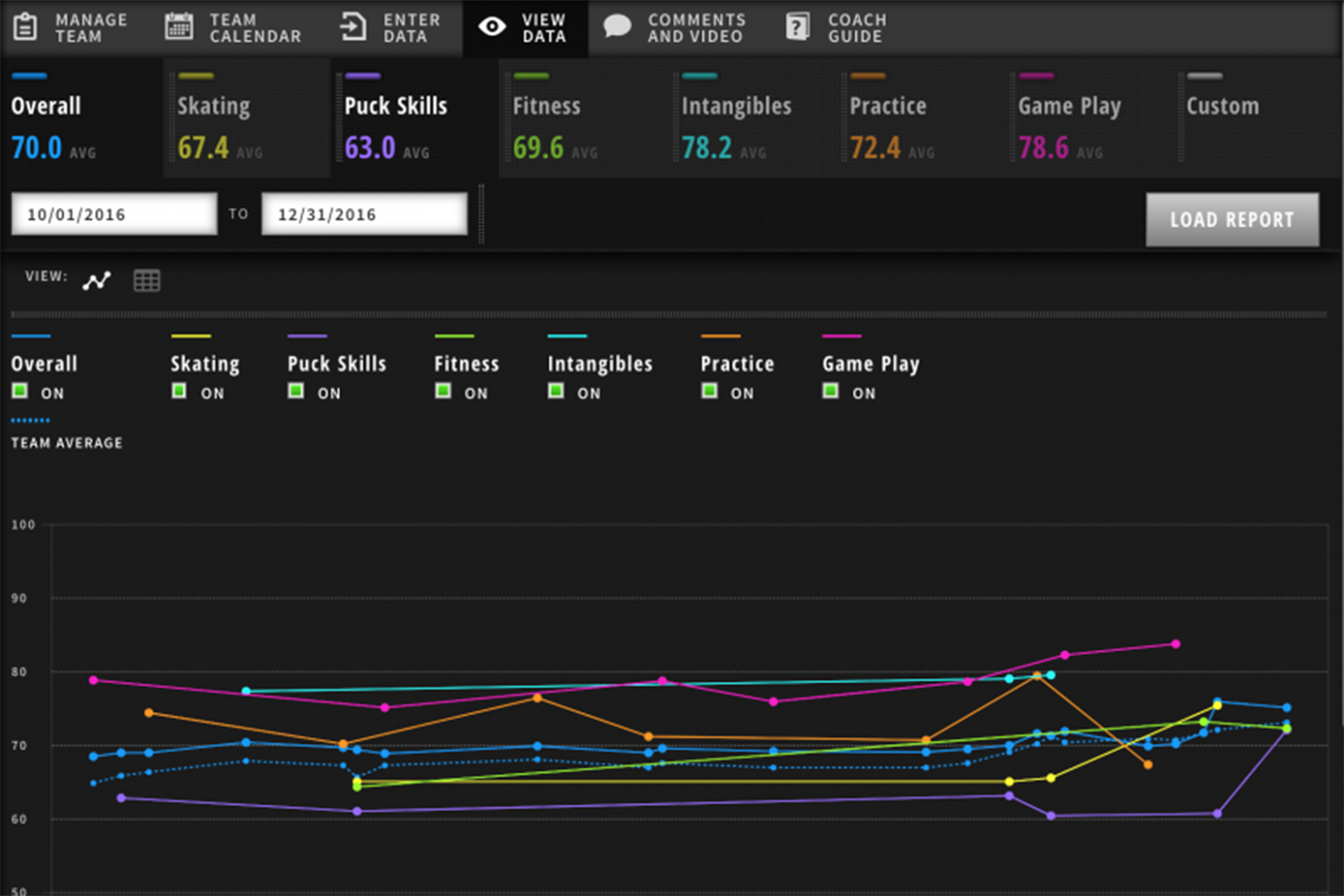 If you had to decide which forward would play on your first power play unit right now, which would you choose?

Now obviously if you’d been coaching these kids for three months (this data set spans October through December) you’d know more about them (ie How do they perform under pressure? How well do they grasp system concepts? etc.) but based on the PowerPlayer data collected and displayed here, it’s pretty easy to see that Player A demonstrates stronger Puck Skills (a combination of passing, shooting, and puck-handling metrics and ratings) than Player B. I don’t know about you, but given that the primary objective with the man advantage is puck possession and generating quality scoring opportunities inside the attacking zone, my inclination would be to put Player A on the first PP unit.

If both players (and their parents) have access to their own personal data but not team data (ie Player B knows that with scores in the low 60s, his Puck Skills are below the team average but he does not know specifically who scores higher than he does), and everyone understands that your decisions re PP time tend to be weighted heavily by Puck Skills, how can anyone argue with your decision?

Players — like students and employees — need specific feedback in order to improve.

Once players understand how they measure up relative to their anonymous peers (ie their own teammates) and they have specific instruction (ie their coach has provided instructional comments / video etc.) to guide them forward, they can decide what to do with that knowledge. For example, Player B can look at his below-average Puck Skills scores and decide they’re good enough, or he can decide to focus on improving that specific aspect of his skill set. If his coaches subsequently see his Puck Skills metrics improve relative to his peers, they’ll have a new decision to make, but it will be based on evidence.

We can’t go on together, with suspicious minds.

In any unequally weighted relationship — coach-player, teacher-student, employer-employee — secrecy and confusion around evaluation and decision-making relative to advancement or promotion lead to problems. Openness and evidence eliminates them.