I just spent a couple of days in a room with a few hundred hockey coaches. And my takeaways from the experience are 100% positive.

The Coaches Site 2017 Hockey Coaches Conference in Vancouver featured an outstanding and varied speaker roster. While the topics ranged from goaltending techniques, to generating offense, to developing young defensemen, to rest and recovery techniques, to mindfulness, common themes clearly emerged over the course of two days.

Coach, author, and former Canadian Olympic rower Jason Dorland kicked it all off with a presentation focused on the challenges inherent in helping athletes to compete, succeed, fail, and ultimately rise to compete again — lessons applicable to all aspects of life. He asked the coaches gathered in the room to think about their personal ‘fuel’, and why they were attending the conference. He surmised that since the vast majority of the coaches in attendance were likely not paid to spend time in ice rinks, the answer had to be rooted in one thing: love. His words — “when you coach from your soul, not from your ego, you raise the game” — really set the tone for the rest of the conference. 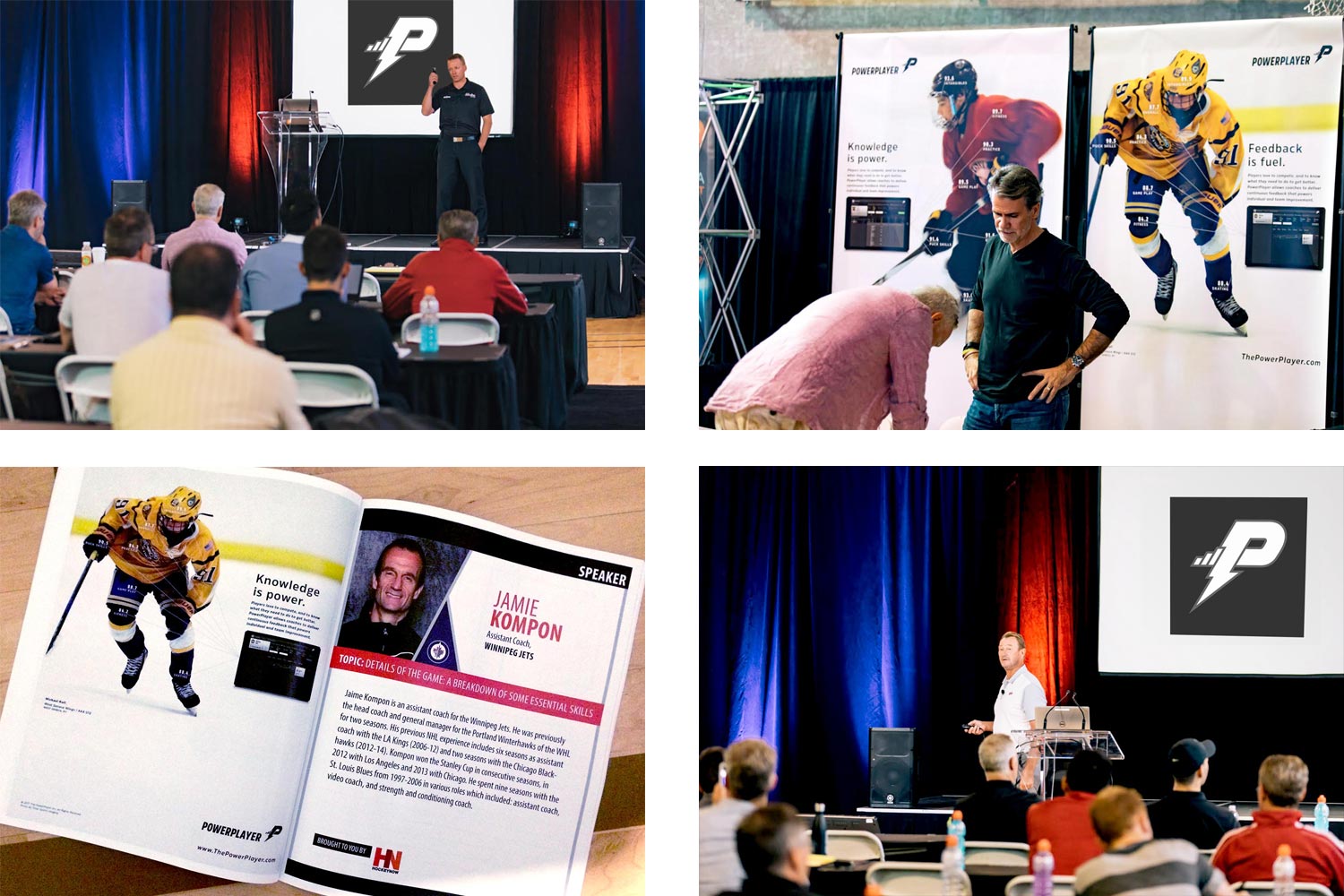 Winnipeg Jets assistant coach Todd Woodcroft echoed that sentiment during his presentation, commenting that he was sure that “99% of the people here today are coaching for the right reasons.” In addition to some smart thinking re teaching faceoffs, he also shared some historical/hysterical personal photos (you’ll want to see his video when it’s released!) and pointed out that even at the pro level, the coaches try to make it fun for players, because fun works.

Brad Shaw, an assistant coach with the Columbus Blue Jackets, also stressed coaching in the affirmative, reminding coaches to “catch players doing things right” and to always use positive reinforcement when teaching. He also noted that he was happy that early in the conference he’d “already heard the word ‘love’ three times and the word ‘trust’ four times,” and that developing young players requires both.

In his presentation entitled ‘Fueling Passion,’ Calgary Flames head coach Glen Gulutzan recounted the process he employed to help move his team from a state of struggle to a state of success. A believer in the power of the positive to motivate, his approach centered on coaching to improve the mental and emotional state of his players, advising attendees to “teambuild every day, not just in response to adversity, because good teams are tight teams.” And like so many others, he advocated providing constant feedback for players to “acknowledge hard work, develop the individual, and build people up.”

Two-time Stanley Cup winner Jim Paek, now head coach of South Korea’s national team, stressed the importance of building a culture of trust through constant communication with players, advising coaches to always “tell players ‘why’, and have a purpose for everything you do.” He attributed his team’s marked improvement to “thinking ‘success’ and playing like a family,” because, while family members may argue from time to time, when push comes to shove they love each other. He also pointed out the importance of fun, noting that in order to be successful at that level he needed his players to see the rink as a destination. “I needed them to want to be there. And to have fun every day.”

Mike Snee, Executive Director of College Hockey Inc., made a strong case for the power of love to drive excellence in player development in a presentation centered on youth hockey in his home state of Minnesota. Pointing out the unique and clearly successful model that sees most young Minnesota players stay home and play for their local high schools, he noted that “playing with friends in front of friends and family is a powerful thing.”

In 1300-game NHL veteran turned broadcaster Ray Ferraro’s fantastic positivity-centered talk — Building a Player — he noted that “the days of tearing players down to build them up are gone. If a player is playing with a coach on his shoulder he can never be successful, but if the message is positive, the player is more likely to get it.” He spoke from personal experience about the detrimental impacts of negative coaching. “No player wants to be embarrassed in front of their teammates, parents, friends. No coach should create performance anxiety.” In one story of a difficult time in his career that was helped by positive coaching, he commented that “I was 27 years old and I needed someone to believe in me,” then asked us all to “think about that when you’re coaching 10-year olds.”

Echoing coaches Gulutzan, Shaw, Paek, and so many others, Ray also pointed out that “the way coaches talk to players is more important than almost anything else.” And in comments that definitely resonated with us at PowerPlayer, he stressed the fact that for players to be successful, “the coach-player-parent dynamic is critical,” and implored coaches to “tell players what you see and what to work on, because feedback is critical.” 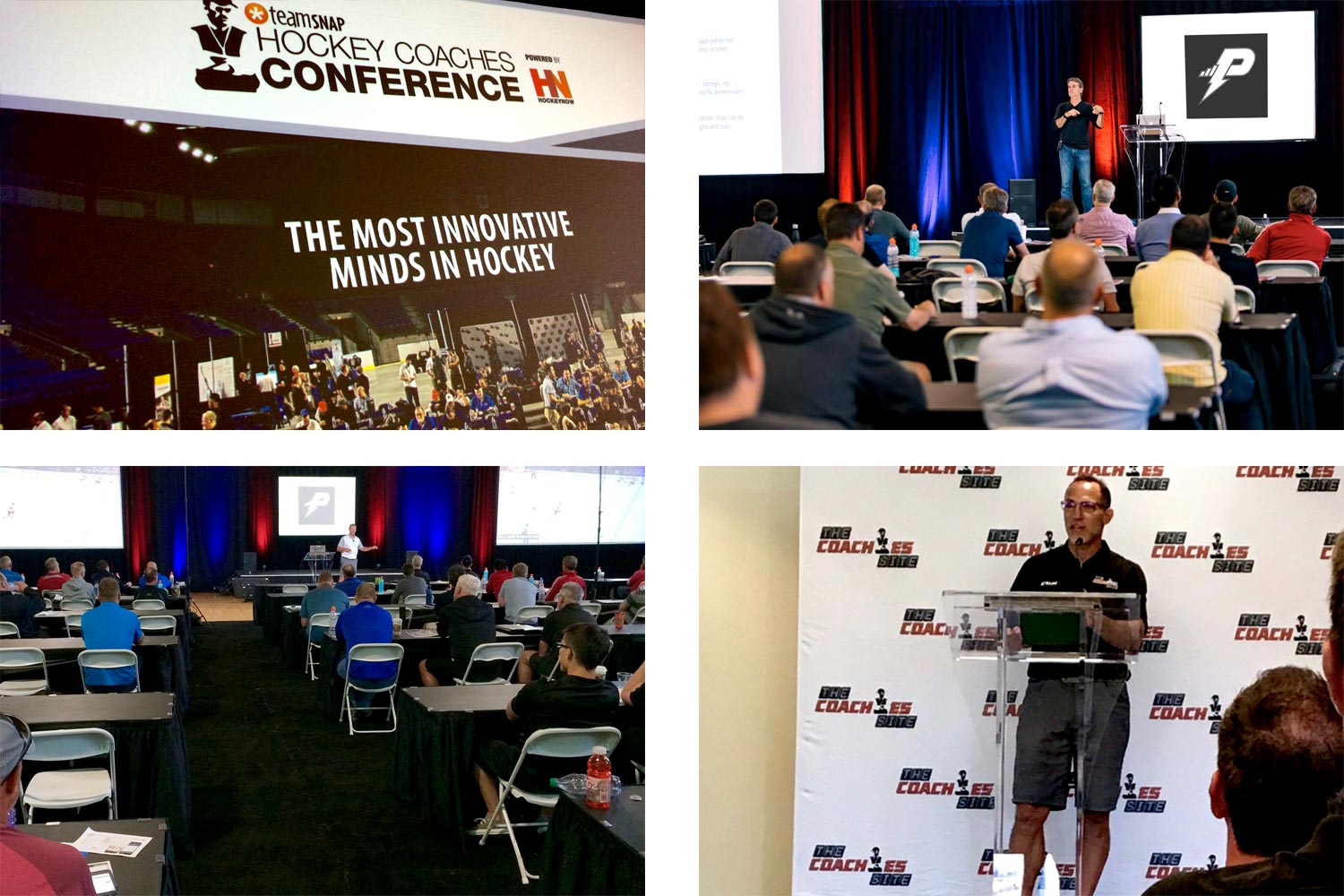 Jets assistant coach Jamie Kompon shared a wealth of knowledge re teaching the new game for defenders, and emphasized in a subsequent conversation that he always lets his players know that he’s their partner, there to help them succeed.

Walter Aguilar, a performance coach specializing in mindfulness, asked attendees if they’d ever played for a coach they’d “go through a wall for.” To those (including me) who raised a hand, he commented “They’re why you’re here.” His talk also focused on the importance of positivity to drive performance, noting that “our energies are generated by the thoughts we have about ourselves.” He pointed out that coaches who provoke fear in their players are actually inhibiting their potential, since “performance equals potential (skill/talent/intuition) minus interference (distractions causing stress reactions).” If players are afraid of you they won’t talk to you, and “fear shuts down engagement, shifts focus to negative outcomes, and creates flight or fight syndrome — negative energy.” He further explained that “power is effortless while force is hard work. When you coach from positivity you create power.” Wrapping up, he reminded us that “coaching isn’t about what you need to do for your players. It’s about who you need to be for them.”

Recently appointed Kingston Frontenacs head coach Jay Varady shared a brief history of the evolution of collecting and analyzing game statistics, and also stressed the importance of communicating with players: “Give your players their game stats. Give them feedback.”

Three-time Stanley Cup winner and Carolina Hurricanes assistant coach Steve Smith shared his insights into the defensive game and into teaching young players, and got us all laughing with the story of the time he almost fought Tiger Williams.

For me, and I’m sure many others, the most moving presentation of the weekend came from Craig Cunningham, who courageously shared his very recent personal challenge. In November, 2016, Craig collapsed on the ice during the warmup before an AHL game, and ultimately had his lower left leg amputated as a result of tissue damage incurred while he was undergoing the 85 minutes of CPR that kept him alive after his heart inexplicably failed. In his talk, Craig certainly didn’t focus on what he’d lost, but instead focused on the love and caring he’d received from his various coaches as he grew up, and the outpouring of support from all over the hockey world that came his way after his injury. His simple but powerful summation: “I can’t put enough emphasis on the importance of positive influence and people who believed in me.”

To say Craig’s talk was emotional would be an understatement, but when an audience member commented that his young son had watched Craig play as a member of the Vancouver Giants, and that he wanted Craig to know that his son thought of him not just as a hockey hero, but as a life hero, it was a powerful reminder of what really matters.

The words I heard at this year’s Coaches Site Conference were encouraging in so many ways. As someone involved in trying to create a better way for coaches to communicate with players and parents, it was great to hear so many of the presenters stress what we believe so strongly when it comes to coaching kids: that feedback is fuel and knowledge is power.

And finally, it was fantastic to hear the words ‘love, respect, and trust’ so often in a room full of people involved in youth hockey. Because while some coaches — the pros whose livelihoods depend on it — might be in the business of winning, most coaches are really in the business of developing winners.