I recently spent two days trying to sip from a firehose of hockey intelligence at the 2018 Coaches Site Hockey Coaches Conference. The presentations were topically varied, thoughtful, insightful, technical, poignant, and at times, hilarious, but some common threads and themes definitely emerged for me. Here’s my take.

Evolution is not optional.

There’s one reason why events like this conference are so valuable: the game is always changing. As Winnipeg Jets Assistant Coach Todd Woodcroft pointed out, “I was first hired as a coach in 2000, and man, the game has evolved a lot in 18 years. Sometimes it changes within a single season!” His sentiments about the need for coaches to be continuously learning were echoed by virtually every other speaker at the conference. As coach, broadcaster, Montreal Canadiens NCAA scout, and USA Hockey Coaching Education Program member Dave Starman told the 300 or so coaches gathered in Toronto, “You can’t do player development without coach development. And that’s why it’s so important that you’re all here.”

And Paul Carson, VP of Hockey Development with Hockey Canada, touched on the inherent challenges in making positive programmatic changes in the game at the highest levels. He encouraged coaches to “take time to understand the challenges in the game, and understand why change is necessary.” He noted that “what we need in arenas every day are program champions. People who understand the ‘why’ behind the changes being implemented,” and acknowledged that while “some of the changes in youth hockey may not be perfect, they’re good. Perfect is the enemy of good.” 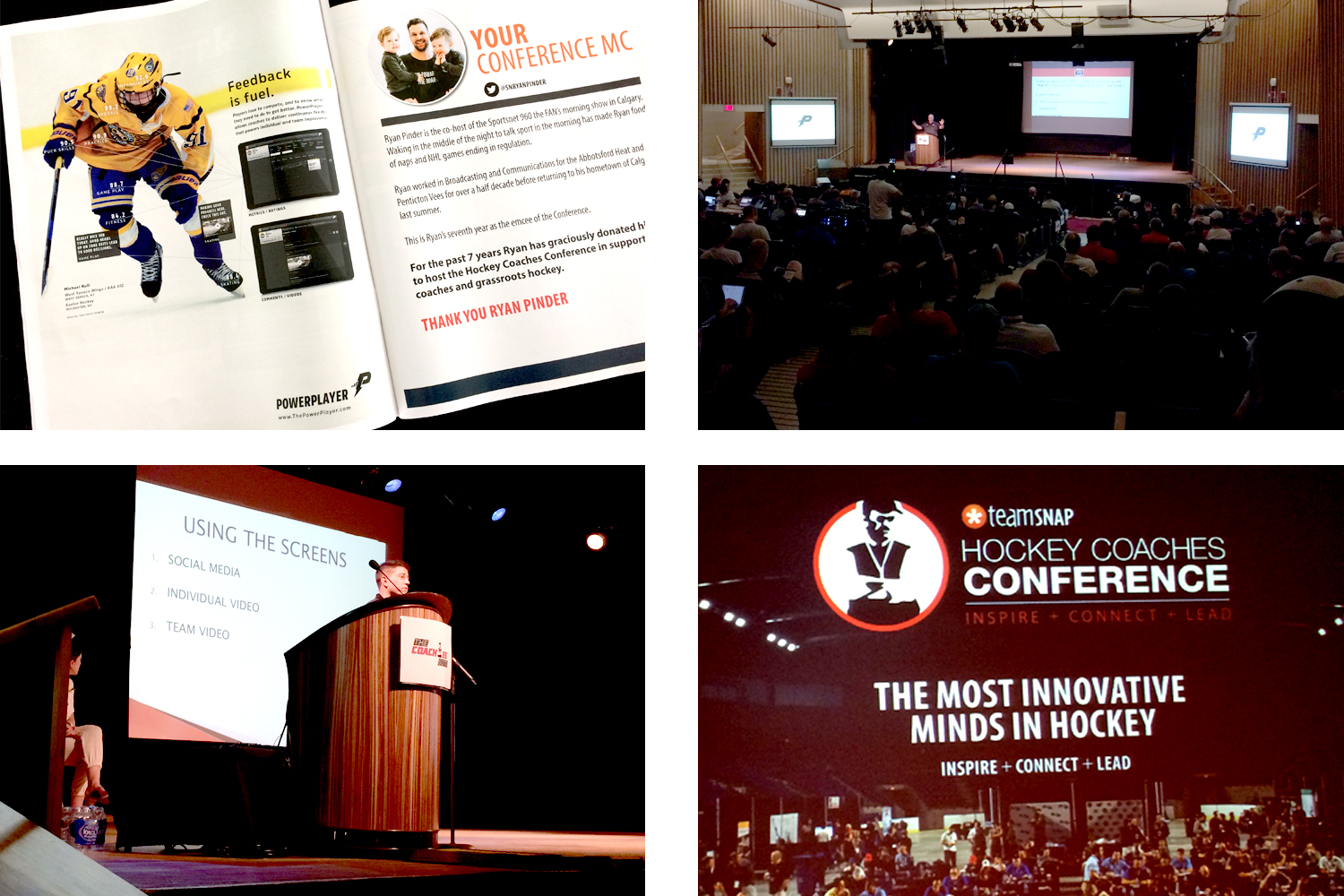 Related to the theme of intentional evolution, the subject of age-appropriate practices and games came up numerous times, most notably in the comments of Dave Starman. Dave pointed out the still not so obvious fact that “an eight year old is NOT half of a 16 year old,” and that programmatic changes implemented by USA Hockey and Hockey Canada aren’t made in a vacuum. For example, he noted that the decision to eliminate body checking for younger players was based on science. “Studies from the Mayo Clinic showed that 12 year olds could see ‘imminent danger’ but could not process what to do about it. It’s now proven that taking out full blown checking in peewee led to higher player retention rates and higher quality players. Just look at the World Junior Championships the last few years.”

Research also backs up the value of small ice games and practices, and a higher practice to game ratio. As Dave pointed out, “I’d rather see my nine year old in a 45 minute practice with the puck on his stick for 30 minutes than drive three hours to a game where he’ll play 15 minutes and touch the puck for less than a minute.” And 800+ NHL game veteran Jeff Brown echoed that sentiment in his talk about the things driving the notably improved player development in the St. Louis area. “I can’t believe people are pushing back on small area games. They’re a fantastic way to develop skills.” And Jeff commented that the way he sees it, “If a kid touches a puck for 17 seconds in a travel game that cost their parents $1,000 to get to, that’s $1,000 worth of development time that we could have better spent at home.”

Research and scientific evidence also factored into the comments of Mark Fitzgerald, strength and conditioning coach for the Anaheim Ducks, who was not alone in pointing out the physiological risks in single sport specialization. “We played handball with 24 pros yesterday. Why? Movement. Competitiveness. Fun!” And Mark’s response to the temptation to apply adult-level physical training techniques to young athletes: “Strength and conditioning for a team of eight year olds? No! Rent a gym and let them play basketball.”

Yes, the game is changing, but for the right reasons. So as virtually every presenter clearly advocated, for coaches and parents, dropping out of ‘old school’ is essential.

Greg Cronin, Head Coach the Colorado Eagles, made it clear: “Never underestimate the importance of fundamentals. We practice them at the NHL level.” And Florida Panthers Assistant Coach Paul MacFarland backed that up, reiterating the continued focus on basics like passing, skating, and hand-eye coordination all the way to the NHL. Edmonton Oilers Assistant Coach Glen Gulutzan stressed the simple skills: “D: It’s ok to punt. If you’re under pressure lift a high one out of the zone. A high flip is a good offensive play when your forwards are flying up ice.” John Becanic of Pyramid Hockey talked about teaching kids to “play fast because they think fast” and the importance of basics like puck retrieval: “Try to incorporate read and react into your practice drills. Players without the puck need to work hardest.” And Hockey Canada’s Paul Carson reminded us that the way coaches teach “FUNdamentals” matters.

Data and analytics were mentioned by many presenters. A panel discussion with conference host Ryan Pinder, featuring James Mirtle and Justin Bourne of The Athletic, delved into the growing importance of on-ice/in-game analytics. Justin pointed out that analysts are finding new ways to prove the value of players beyond goals and assists, noting that, “A lot of guys I played with, I thought, “Boy he doesn’t get a lot of goals but he sure gets a lot of ice time.” We’re putting metrics to that now.” And the panelists noted that when it comes to evaluating potential draft picks, “Teams seem to be getting more efficient at finding players, but you’re looking at 16/17 year old kids, and data at that level is sparse.”

Part-time stand-up comedian and San Jose Sharks Assistant Coach Dave Barr noted that he’s “a big proponent of analytics. It buys you a lot of credence with players when you show them the facts.” And Greg Ford of TalentClick touched on the emerging field of analytics that can help coaches understand and adapt to the various personality types that make up a team. “Personalities matter. Take time to understand your players.”

In a nutshell, a wide range of data is much easier to obtain now, and smart coaches are using it not only to make more informed decisions, but to better understand, reach, and teach players at all levels. 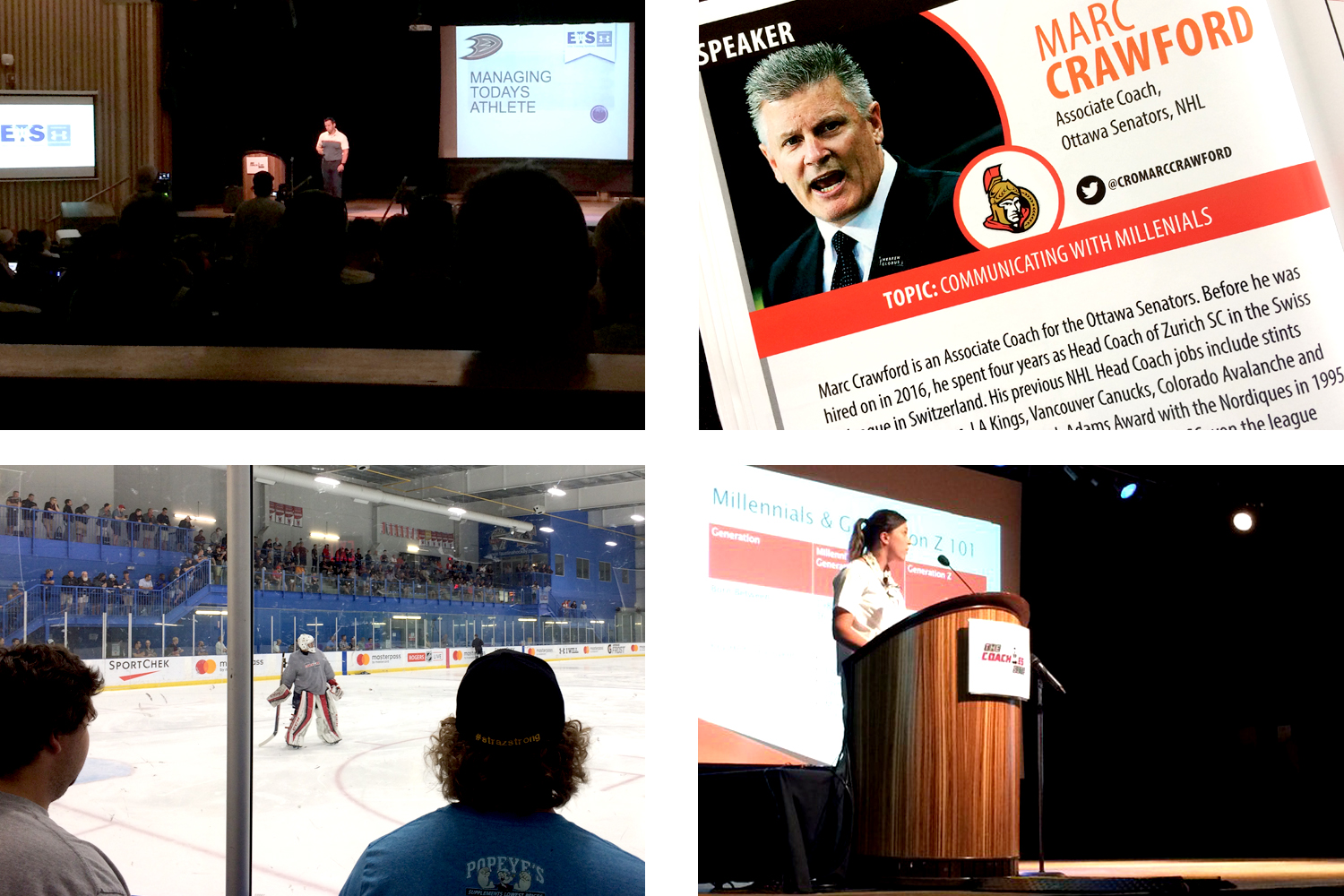 Technology is a coaching tool.

It’s undeniable. Technology is literally everywhere in our lives, and hockey is no exception. Former pro Shayne Toporowski gave an informative talk on new techniques in skate blade profiling, noting that “skate blade profiles should help players with acceleration, agility, speed, and stability. Not impede them.” Shayne’s presentation may have focused on the technical, but he brought it right back to another common theme, when he noted that even the right skate blade matters when it comes to the mental aspects of the game. “Every bit of confidence a coach can give a player, the better off the player is going to be.” And technology, of course, featured heavily in one of the most discussed areas of coaching focus: reaching and teaching players.

“If you picked a player, remind them why you picked them. Boost them up. And always communicate with them, and with their parents.”

The topic of communication was woven into virtually every talk.

Ottawa Senators Associate Coach Marc Crawford’s presentation on communicating with millennials was strengthened by the fact that he brought a couple of his own along with him. After he pointed out that millennials are “a group that wants constant feedback,” (absolutely!) and that more than ever before, coaches need to “connect with players, and be sure to talk with them, not at them,” Marc’s daughter Katie noted that “for the first time, a younger generation is more expert at something than the preceding generation: technology.” Marc’s son Dylan reinforced that fact by by encouraging coaches to take advantage of technology to reach their players. “Young players are always on their phones, so use screens to connect with them. Video your practices. Show them how they’re doing and why it matters. They’ll see it and they’ll get it.” We agree!

The importance of positive tone in communication with players — certainly something near and dear to us at PowerPlayer — was also a recurring theme. After Marc Crawford commented that he “was impressed with Gerard Gallant when he said he doesn’t need to call out player mistakes because the players already know they made them,” Katie noted that “young athletes do not respond to yelling. When coaches yell or lecture constantly, this generation of athletes only hears the emotion, they don’t hear the information. They want calm, cool communication. And they want to know that coaches care.”

Belleville Senators Assistant Coach Paul Boutilier backed up the need for emotional intelligence in coaching: “In teaching and coaching, ‘feel’ is a huge component. Emotional intelligence matters.” And he reminded us of the importance of positive feedback for players at all levels: “If you picked a player, remind them why you picked them. Boost them up. And always communicate with them, and with their parents.” We agree 1000%!

Erie Otters Head Coach Chris Hartsburg was brutally honest about his previous stumbles as a coach, noting that “when I was with the Lincoln Stars, we were doing well, then we started talking about winning, and we fell. Hard.” And he freely admitted that when it came to creating the conditions for his players to succeed, “I didn’t help, because I created a fear-based culture. I had to take a hard look at myself because I didn’t like who I was.” His current approach: “When players are treated with respect they can play to their full capabilities.”

Dave Barr mentioned that even at the NHL level, players need to hear positivity from their coaches. “I’m a big believer in positive reinforcement. I want my players feeling good about themselves! Show a player about eight video clips of themselves doing something good and they’ll be, like, ‘Damn, I’m good! I knew it!!’”

And Toronto Maple Leafs Goalie Coach Steve Briere also weighed in on the importance of supporting players emotionally as well as technically. “Endorphins, dopamine, serotonin, and oxytocin: that’s the chemistry of happiness. People who are successful tend to be happy because they work hard, are purpose driven by their goals and achievements, and are in control of their lives. So give your players goals, praise them for working to achieve them, then raise the bar and repeat.” He also pointed out that sometimes “players think coaches don’t like them because they never hear from them. So talk to them! Coach them!”

Combine all of that, and then add in Rogers Sportsnet hockey analyst Elliotte Friedman’s rich insights and anecdotes, and I’m positive that every coach in attendance headed home with more than a little new thinking and energy to power them into next season. For me, virtually every presentation and conversation at the conference reinforced the best attributes of the people I’ve bumped into in and around the game of hockey — a willingness to learn and to share knowledge, and a universal commitment to making the sport better for all who participate.

The game itself is simultaneously simple — just score more goals than your opponent — and incredibly complex — figure out how to get 20 or so wildly different people to come together as one, with a single focus that’s enhanced rather than impeded by their various personalities, abilities, and collective chemistry. I’m guessing that for anyone driven to meet those challenges, the 2018 Coaches Site Hockey Coaches Conference was a huge win.

PS In the spirit of positive feedback, huge props to the team at The Coaches Site for pulling together another incredible event.

PPS Remember, if you attended the conference, you qualify for a 50% discount on PowerPlayer subscriptions for your team or club. Give us a buzz.