Changing on the fly.

Weird, to say the least.

When things get weird in hockey, savvy coaches make adjustments to figure out how to prevail, and that’s just what the folks at The Coaches Site did when they pivoted from a Covid-cancelled in-person conference to their 2020 Virtual Hockey Summit in a matter of weeks.

Instead of 300 or so coaches gathering in person in July, more than 2,000 coaches from at least ten countries gathered in front of their laptops, ipads, and phones for two days in September, and took in some smart and timely thinking from some of the brightest minds in the sport. As always, it was a lot to process — if you weren’t able to attend, the presentations are all available to Coaches Site subscribers — but here’s my attempt to hit a few of the highlights from my perspective.

‘F’ words rule.
Maybe for some reason I’m just a little more tuned in to one f-word than other people, but right from the summit puck drop, that word seemed to pop up over and over again: Feedback. The summit’s very first presenter, Tomas Monten, head coach of Sweden’s U20 National Junior Team, made it clear that he’s an advocate for it as a coaching tool, noting that “positive feedback reduces the time needed to correct a player, and players who get positive feedback — their brain tells them they want that feeling again. Science backs that up.” He also reminded attendees that negative feedback carries adverse effects for competitive athletes. “Players become afraid if you give them too much negative feedback. They’ll only try to behave in ways that avoid them getting it.” And Canucks skills coach Glenn Carnegie reiterated that the coach’s role in skill development goes way beyond running drills. “Don’t just run drills. Develop skills, and provide lots of good feedback.”

Those sentiments dovetailed perfectly with strength and conditioning coach Doug Crashley’s comments centered on another f-word: fun. “A key component in helping athletes pick up their intensity is the fun level and the tone and energy that coaches have at practice. Basically, if your players aren’t having fun at practice you’re doing it wrong.” 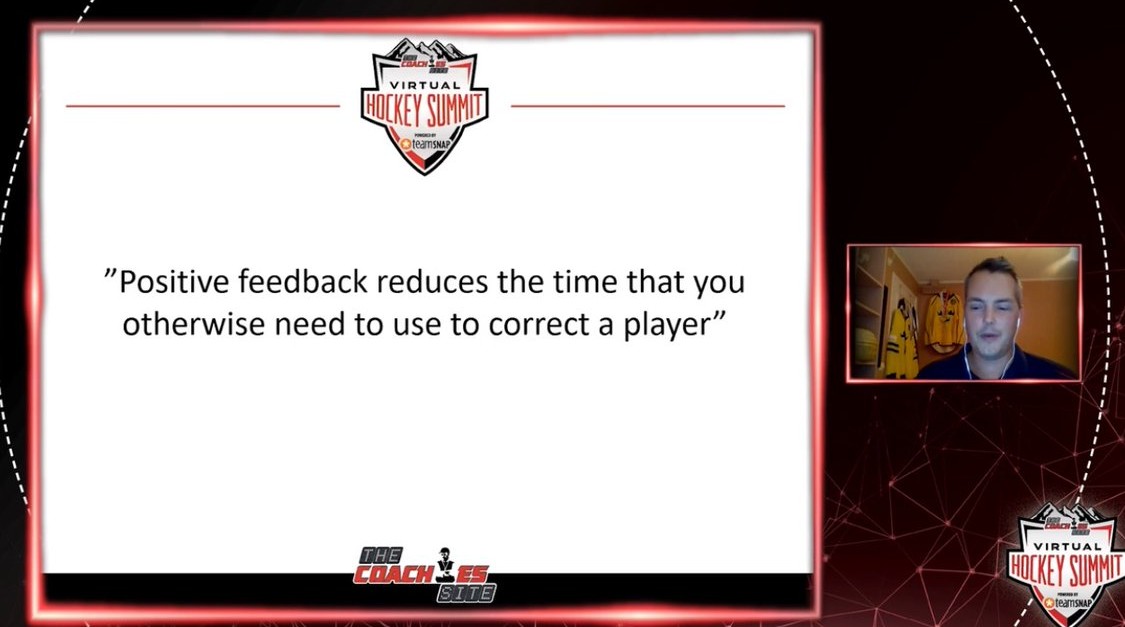 Tomas Monten, Head Coach of Sweden’s U20 National Junior Team dropping one of our favorite F-words.

Tactical / Practical / Technological.
From goaltending to the power play to skating / balance (Weavers wobble but they don’t fall down, except when they collide with Patrick Sharp), the Virtual Summit was a great source of practical hockey knowledge. Dave Starman and Brian Daccord delivered some solid insights into working with — but not overworking — goaltenders, with Brian reminding us to treat goaltenders the same way we’d treat players: “The stigma is this: if the goalies aren’t dropping down on every shot in practice they’re not trying. Can you imagine if you asked players to finish their checks in practice? You’d have no players left halfway through the season.” Dave also reminded coaches to ask themselves if their goalies are “surviving or thriving in practice” and noted that “goalies are not targets.” And like many other presenters including Rod Brind’Amour, Glen Gulutzan, Cassie Turner, and Todd Woodcroft, he reiterated that when it comes to coaching, technology such as video and other feedback mechanisms are great tools: “Think about the power you hold in your hand. Take your phone on the ice and show them what you see. Better yet, ask them what they see.” And former Marlies/Leafs analyst and coach Jack Han took it one step further, exploring the concept of ‘CHEL’ (NHL video games) as practical simulators to teach hockey sense.

Talk it up.
In a player panel hosted by high performance coach Dr. Cassidy Preston, Mike Kostka, Mari Pietersen, and Tyler Campbell provided insights into the importance of coach to player communication. Mari stressed the importance of positive feedback and communication to a player’s psyche: “A fist bump or a few simple words of encouragement like “I believe in you” mean the world.” And Mike noted that “some coaches don’t communicate at all. When that happens you just check out as a player because you don’t feel respected.” Tyler noted that “communication is huge. I had times where I didn’t know where I was at as a player and that wears on you mentally.” All the NHL-level presenters including Bruce Boudreau, Carolina Hurricanes head coach Rod Brind’Amour, and Calgary Flames GM Brad Treliving reiterated the importance of connection. “Make sure you communicate. Make sure you stay connected.”

Big issues, bigger strides.
For me personally, as the father of a hockey-playing daughter who’s heading toward a degree in sports management, one of the most powerful discussions came from the panel hosted by groundbreaking hockey broadcaster Leah Hextall and featuring Seattle Kraken pro scout and Hockey Hall of Fame member Cammi Granato; SC Bern General Manager Florence Schelling, the first woman ever to be named GM of a professional men’s team; NHL Coaches’ Association President Lindsay Artkin; and Susan Cohig, Executive VP of Club Business Affairs for the NHL. They covered a range of topics, but all pointed to the fact that women are making a huge impact in the sport of hockey: as players, coaches and scouts, in management and operations, and in marketing and broadcasting. They noted that the importance of trailblazers cannot be understated, and Lindsay Artkin commented that “visibility and exposure is important: this panel is a great example of leadership and of “if you see it you can be it.”” And Cammi Granato recalled the thrill she got when “a little girl asked me “How do you become a scout?” Notably, more than one Summit presenter referenced the value in watching the women’s game for insight into the way things should be done. Dan Price, GM and head coach of the Victoria Royals, pointed out that “we draw a lot of knowledge from watching the women’s game. It’s so well coached and so well executed at every level.”

Dr. John Izzo and culture coach Lawrence Scott provided some important and timely dialog around social and racial justice, relating the process of correcting inappropriate behavior to coaching: “Right is right and wrong is wrong. When you coach a player, on the spot corrections are about helping players be more successful. Do the same thing when you see or hear inappropriate comments or jokes.” They also stressed the importance of coaches modeling the right behavior: “Leaders go first!” “Values aren’t taught, they’re caught. As a coach you have to ask yourself “What values would people catch from me?”” 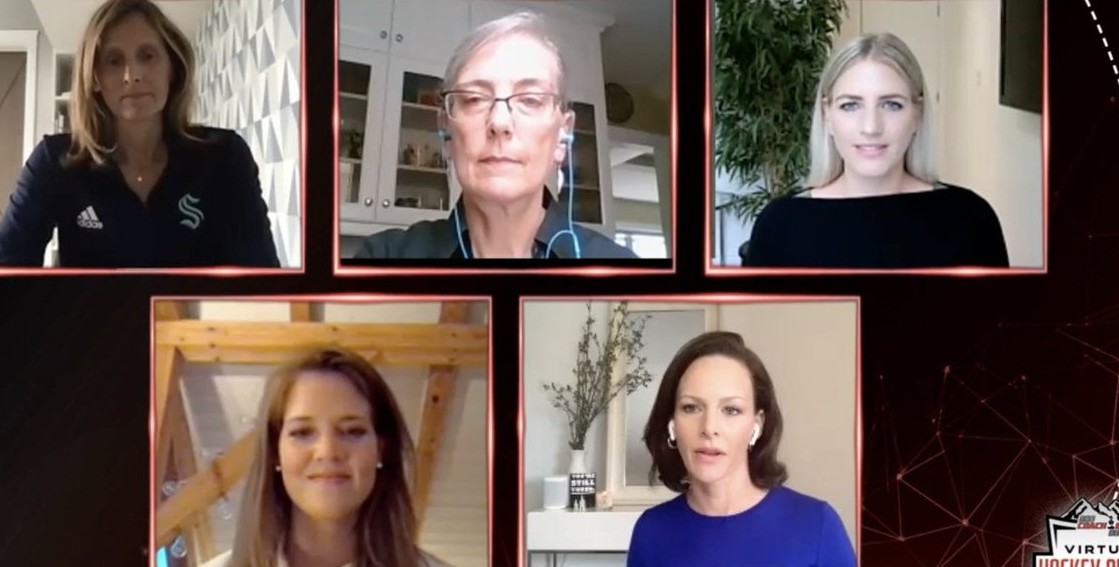 Sage advice.
The always entertaining and informative Bruce Boudreau has been around the hockey block a few times, and clearly his ability to learn and evolve has been instrumental in his longevity and success in the game. He talked about some of the changes he’s seen, referencing his own relationship to his coaches as a player relative to the player-coach relationships of today. “When I played, players didn’t ask questions. I never once complained, and that’s probably my problem, because you never get anywhere without doing some bitching about ice time or whatever’s going on. But it was the ‘70s and coaches never really talked to you. Nowadays, kids ask questions, and today it’s a coach’s job to find out what works for each individual player. Talk to them. Share a laugh. Show that you’re human.” Echoing the depth of advice on attention span and teaching put forward by Travis Crickard of Hockey Canada, Bruce reminded us that coaching is “like being a good teacher in school. You’ve got to find out what helps that player learn and retain rather than just screaming and yelling and going about it one way.”

NHL veteran turned head coach Rod Brind’Amour echoed Bruce’s comments. “My career playing 21 seasons I can remember maybe five times I was in the coach’s office. I didn’t even know what the office looked like! Now it’s much different. If players feel they can talk to the coach it makes them feel a lot more at ease. If you can have that immediate feedback players can go out and play at their best.” And he acknowledged the differences in players of today compared to twenty or thirty years ago. “We parent differently now. I know I do. My dad wasn’t a hardass but he was a lot tougher than I am on my kids. You have to change with it. Being more open and honest with your players, there’s nothing wrong with that.” 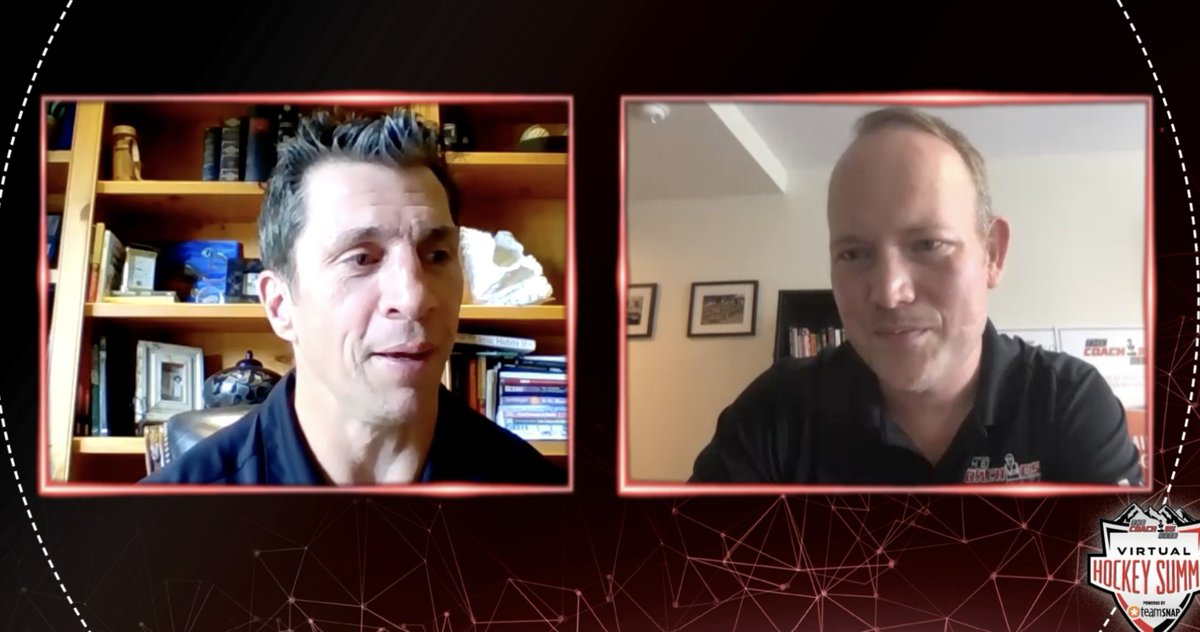 Rod Brind’Amour sharing  a few decades of insights with Aaron Wilbur of The Coaches Site and 2000+ attendees.

Changing on the fly.
Hockey is fluid. It’s all about creativity and innovation within the confines of the rink and the rules. So it’s no surprise that everyone involved in the Coaches Site’s first Virtual Hockey Summit — from the organizers to the presenters to the attendees — was ready, willing, and able to change it up when Covid-19 changed the game. In essence, everyone involved was already following Bruce Boudreau’s advice for anyone who wants to succeed in the game of hockey — or the game of life: “If you don’t change, you don’t last.”